Inspired by Szklarska Poreba and the EGG school, Katie and a colleague from UPF (Barcelona) organised a student retreat in Catalonia this October. It was called Retreat for Students in Semantics and Pragmatics (ReSSP). We had two invited speakers, Becky Woods (Huddersfield) and Marcin Wagiel (Brno), who are great both academically and personally; as well as 14 contributed talks by grad students in semantics.

Katie+Kata and a colleague from UPF

Katie and Kata were very happy with the weekend and hope to repeat it in the future! 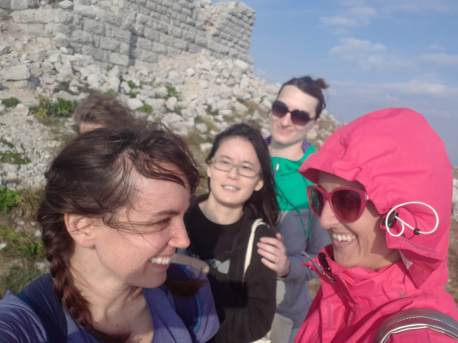 on the top of RTANJ

Katie presented joint work with Cora Pots (KU Leuven) on motion/posture verbs in periphrastic progressive constructions in Dutch and Afrikaans, and Berit presented her work on cross-slavic variation in passives. Thanks for organising, Berit! 🙂

Last week Zoltan participated in the Sinn und Bedeutung 23, which took place in the Universitat Autònoma de Barcelona in September 5-7, 2018. Sinn und Bedeutung is one of the most important conferences on formal semantics in the world and was particularly competitive this year.

In addition to chairing one session, Zoltan presented the talk called “Not all state nominalizations are mass nouns”, in which he argues against the standard analysis according to which there is a mapping from atelicity onto the mass domain. On the basis of certain specific data in Spanish that have gone unnoticed in the literature so far, he claims that the requirement for predicative bases to form mass nominalizations is that they must be gradable rather than atelic.

“It was a pleasure to meet again my colleagues and friends of the Universitat Autònoma de Barcelona. This type of conferences promote the linguistic debate at a high level in an ideal atmosphere in which not only professors, but also students, feel comfortable enough to share their ideas. Special thanks to the organizers for making that possible”.

For the first two weeks of August, Katie attended the Eastern Generative Grammar (EGG) School, this year in Banja Luka (Bosnia). This was her second time at an EGG school, and she is a big fan. The school is based on some nice ideas, such as making high-level linguistics courses available to students in Central and Eastern Europe and keeping costs low for students generally. Another big goal of the school’s organisers is to promote interaction between teachers and students–a big plus for learning and for the social environment.

While there, Katie attended courses by Patrick Elliot (ZAS Berlin), Daniele Panizza (Göttingen), Yasutada Sudo (UCL), Sarah Zobel (Tübingen), and Gillian Ramchand (Tromsø). One course, concerning the Exhaustivity Operator was even extended into the second week because there was such a lively discussion!

There was also an Open Podium during the second week, where Katie had the opportunity to present her joint work with Elena and MEAT friend Agustín Vicente. She received good feedback, including a question about the potential diachronic connection between the construction under investigation (Ethnic/Social Terms used as Insults, ESTIs) and slurs.

At the beginning of July, Katie went to Sociolinguistic, Psycholinguistic and Formal Perspectives on Social Meaningin Paris, organised by Heather Burnett and Judith Degen. There, Katie presented joint work with Elena and local friend Augustín Vicente with a talk entitled ‘On the social meaning of stereotypes: A comparison in the realm of expressives’. This work investigates the differences between slurs and what we call ‘ESTIs’ (Ethnic/Social Terms used as Insults) in European Spanish. ESTIs are a particular type of word which have both a neutral, denotational use, and an insulting use which capitulates on stereotypes of the respective group; interestingly, the insulting use (ESTI) can only be used for people outside of the ethnic or social group. Examples we’ve found include portera‘doorwoman’, which is used for targets perceived as lazy gossips, and gitan@ ‘gipsy’, which can be used for people perceived as scamming or liars. [Note: we do not endorse these stereotypes of the social groups.]

The workshop itself was very interesting, with lively discussion and a fun social programme. Some highlights included Elin McCready’s work on Honorification and Norms, Sunwoo Jeong’s work on the social meaning of rising declaratives, and Teresa Pratt’s discussion of the social meaning of interactional moments, where she reported on sociolinguistic data collected during her PhD. Thanks for great organisation, Heather and Judith!

Last week, Katie went to Brussels to give a talk in the CRISSP research seminar. Her talk described the latest developments of her dissertation work: the grammaticalisation of posture verbs in English and how the semantics of the locative use interacts with aspect. She reported her most recent corpus data and proposed the beginnings of a theory about the differences between ‘to sit’ and ‘to lie’ when they are used with inanimate subjects. Thanks to the audience for really helpful feedback! 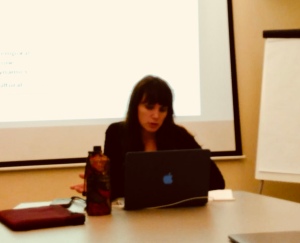 Also in Belgium: Katie  was able to attend a lecture series by Bronwyn M. Bjorkman. The lectures were about tense from a morphosyntactic and semantic perspective. Bronwyn is a very good teacher and she presented the various puzzles of tense in an interesting way. Overall very enjoyable! During the week, Katie and her co-author Cora had the chance to talk to Bronwyn about their work on the grammaticalisation of Dutch and Afrikaans posture verbs (+ the motion verb ‘to walk’), more specifically on their use as aspectual markers in the periphrastic progressive. Bronwyn gave them some nice suggestions for future avenues. Thanks for a nice week in Brussels!

We are very excited to let you know that the book entitled The Semantics of Gradability, Vagueness, and Scale Structure: Experimental Perspectives, co-edited by Elena Castroviejo, Louise McNally and Galit W. Sassoon, and partially supported by the MEAT project, is finally out! The volume has been published in the Springer series “Language, Cognition, and Mind”, and it was inspired by the talks presented at the workshop of the same name that took place at the Instituto de Lengua, Literatura y Antropología of the Spanish National Research Council in Madrid on May 28th and 29th, 2015.

We hope you find it interesting. Don’t hesitate to spread the word!

The program of the forthcoming 41.Jahrestagung der Deutschen Gesellschaft für Sprachwissenschaft, which will take place in Bremen on March 6-8, 2019, is now published. Among the Arbeitsgruppen, you can find two workshops organized by MEAT-ers!

Katie is co-organizing the Workshop “Encoding emotive attitudes in non-truth-conditional meaning” along with Curt Anderson.

Berit, Elena and Laia are co-organizing the Workshop “Concessives vs. Adversatives: Opposing opposition“.

Too bad we can’t attend each others’ workshops!!!

Don’t miss the deadlines and submit your abstracts this summer.

Elena has finished her spring tour in Konstanz, where Andrea Beltrama, María Biezma, Erlinde Meertens, Maribel Romero and Ramona Wallner from the DFG funded research unit (FOR2111) Questions at the interfaces organized the workshop “Meaning in non-canonical questions.”

Elena presented recent work on Catalan interrogative tag “eh?”, which has two pragmatic uses which have not been adressed from a formal perspective. This talk was interspersed with other presentations on various types of biased questions, modal particles in questions, prosody or scope-marking in interrogatives across languages.

Konstanz welcomed us with a summer-like weather, which permitted nice strolls along the river, by the lake and through the old town.